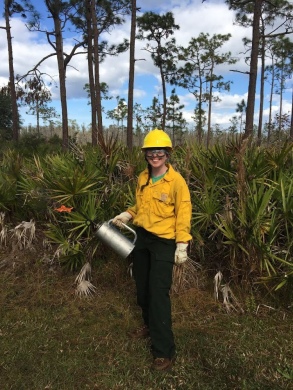 Me at the burn!

In December, I participated in my very first prescribed burn.

For all my reading and writing about fire, I had never been part of a burn. I’d been waiting for this moment for seven years. In 2010, I had a summer job with The Nature Conservancy, based in New Paltz, NY. The Nature Conservancy (TNC) has been a leader in using fire for ecosystem restoration and management for decades, so even though we were not in a fire hotspot, fire was a big focus for the New Paltz office. During that summer, TNC was running the training courses that are a prerequisite to many jobs that use fire, like wildland firefighting and many prescribed fire positions. These courses are offered by the National Wildfire Coordinating Group and include S130 (Introduction to Wildland Firefighting) and S190 (Introduction to Fire Behavior). These courses are usually supplemented by shorter FEMA courses on the National Incident Management System and a rigorous physical “pack test.” I completed the requirements at the end of the summer, and I was eager to set stuff on fire. I returned to college in Chicago, and signed up for an e-mail list that recruited locals to help with prescribed burns in the greater Chicagoland area. Unfortunately, most burns were on weekdays, when I had classes, and were difficult to access without a car, so I never participated.

In August, the Student Association for Fire Ecology announced that they would be organizing a prescribed burning opportunity in conjunction with the International Fire Congress in Orlando. I signed up right away, but my qualifications had expired, so I spent my spare hours in the fall retaking the online courses. I pulled out the leather gloves my coworker at TNC had given me, ordered a pair of leather work boots on eBay (8-inches high, no steel toe). I packed everything up alongside my conference clothes (and a maid-of-honor dress, but that’s another story!), and headed to Florida.

On Saturday evening, following a week of conference talks, we headed out to the Disney Wilderness Preserve, about 45 minutes from Orlando. There were 11 students. We got to know each other over dinner and jigsaw puzzles in the preserve dormitory. Ten graduate students, one undergrad. Nine women, two men–a highly unusual ratio for a fire-related event. Nine had been on a prescribed fire before, and many had extensive experience working with fire, both in firefighting and prescribed fire (“firelighting”, if you will). It was a formidable but friendly group. And one thing I learned quickly–people who’ve burned before love it a lot, and are really excited for newbies to share their joy.

Another thing I learned: prescribed fire involves a lot of “hurry up and wait.”

We headed to the preserve office around 9 am on Sunday. When we arrived, those of us who needed to borrow gear found flame-resistent Nomex pants and shirts and hard hats that fit (more or less), and suited up. Most of the gang had brought their own. We drank coffee in the office until the rest of the burn crew arrived.

When everybody arrived, we introduced ourselves. We were a mix of TNC Florida employees, students, and other volunteers. The whole operation was headed up Zachary Prusak, TNC Central Florida’s Conservation Director and burn boss (you can read a cool interview with Zach here). Zach handed out maps of the area we would burn and told us the fire plan: we would burn a 5-acre triangle near the dorm. He’d hoped to burn a different, larger area, but the winds would’ve blown smoke straight into a nearby neighborhood (you can see on the map below how close neighborhoods are!). We talked about a weather station that we’d need to protect (spot it near A on the map) and identified safety zones and escape routes. We discussed how we would protect the longleaf pine trees, which were more vulnerable in our December burn than they would be in a natural spring burn. Next, we assigned roles: a student, Peter would be Burn Boss as a trainee, under Zach’s supervision. Two more students, Kayla and Anjel, were Squad Boss trainees, leading squads A and B, which would work different parts of burn. Carrie was Fire Effects Monitor (FEMO), meaning she would monitor, record, and report on fire behavior and weather data throughout the burn. Each crew had an engine (a pickup rigged with pumps and hoses) and a UTV (also rigged up with hoses), and crew members in charge of the vehicles. We piled in and headed to the site.

Our burn site, near the dorm, bordering neighborhoods, and a pond. With attention to weather and good control lines and safety zones, we could safely burn in this area.

We waited. We ate oranges. Crew A cleared fuel around the weather station. We got our first weather report from Carrie. Finally, it was the moment we’d all been waiting for: setting stuff on fire. We began with a small test fire.

Talking through the fire plan.

Most prescribed fires use a driptorch. This is a really cool device that drips fire onto the ground. Inside the torch is a fuel mix of gasoline and diesel fuel. Attached to the top is a hose with a wick at the end. When you tip the torch toward the ground and the wick is lit, fuel runs through the hose, is ignited by the flame at the tip, and falls to the ground. If you tip the torch quickly down and then up, you can drop “dots” of fire. If you leave it pointed down as you walk, you can drip a stream of fire in a line along the ground. In the video below, you can check out the fire burning in the longleaf pine savanna. Later in the video, watch Amanda Stamper, manager of TNC’s fire program in Oregon, continue to light the fire using a driptorch.

We had about 20 people for a 5 acre burn, which is way more people than needed for a burn of that size, so there was a lot of waiting around. But as I learned the evening before, prescribed burn people love newbies, and everyone was eager to hand me a torch as soon as possible. After she started the fire, Amander Stamper (in the video above) reviewed driptorch usage with me, and then handed the torch over. Then I was up, drip torch handle in one hand, carefully tilting the torch….and just casually pouring fire on the ground. Okay, not casually–carefully, following my crew leader’s instructions. I worked my way down the road (from A to B on the map), on the edge of the burn area, dropping a “dot” every 5 or 10 feet. At the same time, experienced crew members brought drip torches into the interior of the burn area, dotting near the base of large pines to burn out the fuel beneath them before the fire could approach at higher intensity. This strategy would prevent the death of too many of the longleaf pine trees.

The flames quickly grew taller than me, up to at least 15 or 20 feet. The palmetto crackled loudly as it burned. It quickly grew too hot to stand close to the fire, though you could escape the heat upwind a few feet.

Once I reached the southern corner of the triangle of land that served as our burn area, I passed the torch on to another student volunteer, Caroline. From this point on, there was a lot of watching, waiting, and taking pictures and video. Prescribed burns are really fun, flames are entrancing when you trust that they won’t hurt you, and burning makes you feel like a badass–a Nomex-wearing badass for nature.

Once the target area had enough fire in it to burn out most of the understory fuel, we stepped back and waited for the flames to die down. Within three hours of the first flames, we were done. This small patch of land had been transformed. Dense green palmetto and other shrubs had turned to charcoal and ash, with only the skeletons of the root structure remaining (locals said they named these structures for their resemblance to the back of an alligator peeking above of the water). Some longleaf pines had burned and fallen, but most were just fine. We walked into the center and took a group photo. 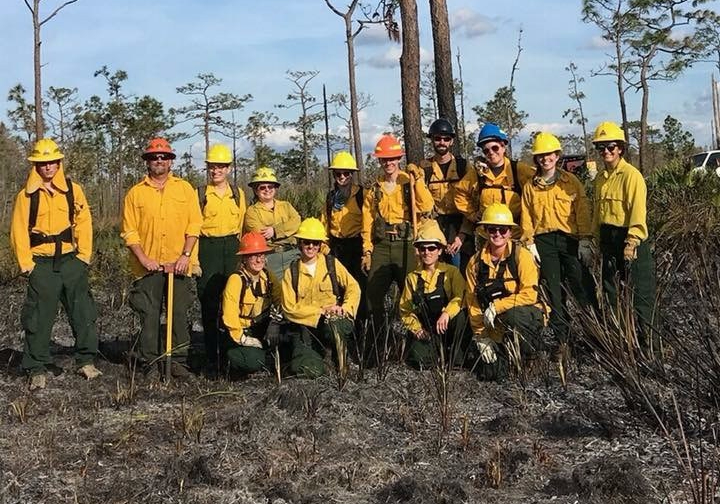 Group photo of the students at the burn!

At this point, it was fun to burn and cool to see the land transformed, but it wasn’t really a pretty landscape. Even though I knew that the longleaf pine savanna thrived on fire, it wasn’t obvious yet on this triangle of land what that really meant. But before long, I’d witness the power of prescribed fire on this land.

Read on for what I learned about prescribed fire in longleaf pine savannas in my next post here!

And see below for more photos of the burn!

One thought on “The Firelighters of Florida: On the ground at my first prescribed burn”