Note to local readers: Stebbins is presently still CLOSED to the public and is expected to reopen in early May. Please respect the closure and allow the ecosystem some time to recover. In the interim you can visit via a guided walk or as trail crew–see here for more information.

I have written a couple of times now about last summer’s fire at Stebbins Cold Canyon Reserve. It’s not a fire that you would have heard about on national news. It wasn’t very big, and it didn’t cause a lot of infrastructure damage. But I’ve been very interested in this particular fire, because it’s local. I can drive to the burn site from my house in about 30 minutes. In fact, I can take a quick turn off the street where I live and can then drive all the way to Stebbins on the same road. When the fire was burning, I watched the smoke sit heavy on the horizon from my front yard, and I watched ash fall from the sky like summertime snowflakes. Stebbins is a place where I and my fellow residents of Davis go hiking on weekends; it’s where I took a visiting prospective student to give her a taste of California ecosystems; it’s where my colleagues and I built a new citizen science program over the last few years. Stebbins has become one of “my places,” along with the reservation behind my family’s house in New Jersey, my island scout camp in the Adirondacks, Lake Michigan, and others.

In environmental education and related fields, we talk about one’s “sense of place.” Your sense of place includes your knowledge of a landscape, ecological or otherwise, how you fit into it, and your experiences there. I am interested in the fire at Stebbins because it is a major change in a landscape for which myself and many people around me have a sense of place. Not only has the color and composition of this landscape changed since the fire, but so has the way we interact with and experience this place.

I have visited Stebbins now three times since the fire: August 2015, November 2015, and February 2016, each time with a different group of people. Here is what I’ve observed so far: 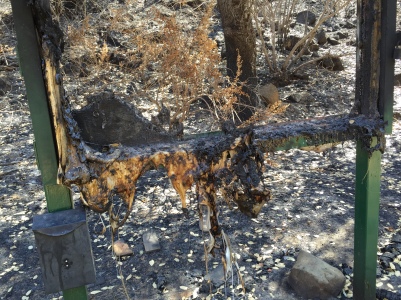 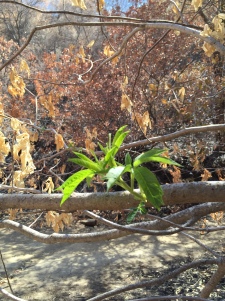 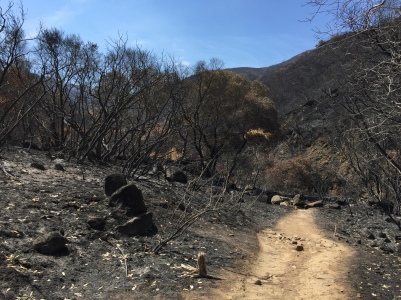 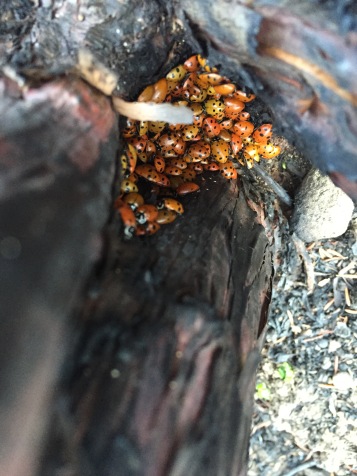 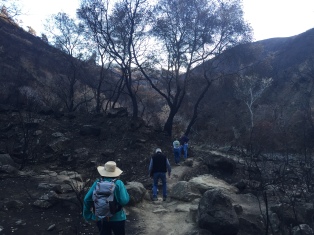 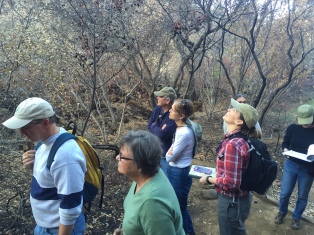 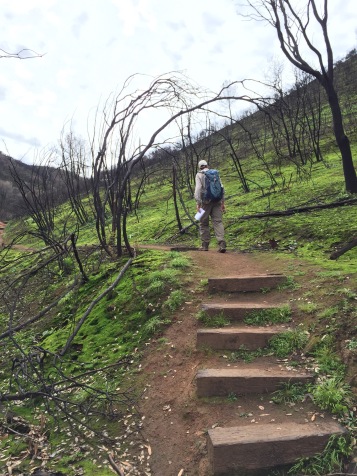 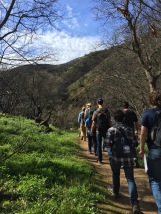 My first visit was about a month after the fire. I stopped by with a friend who has worked on the CPP-Stebbins citizen science project on the way to do some fieldwork for my dissertation research, just up the road. We were two fire ecologists, and we were excited to be there. The most striking thing was how the landscape had opened. I could suddenly see hillsides stretching up high to both sides, and out beyond the trail. Before, trees and dense shrubs blocked that view. Most trees still stood as they always had, but many shrubs were skeletons. We saw crisp blackened leaves still hanging on the trees and ash covering the ground. The bulletin board near the entrance had become a window, and fiberglass posts marking phenology trail plants had exploded–proving that they were, indeed, made of fibers. And amidst the brown and black and grey, even in the dry heat of California summer only a month post-fire–during a drought no less–was green. Green sprouts on a hillside of black soil, green sprouts at the base of trees, and green sprouts from the branches of a California buckeye! The buckeye wasn’t supposed to have any leaves at all in the summertime! We poked at resprouts and talked fire ecology until we reached a point where the trail was covered in debris, and we headed home.

In November, I put together a visit for the volunteers for our citizen science project, the California Phenology Project at Stebbins. These volunteers had been taking data on the timing of leafing out, flowering, and fruiting for a year before the fire, and they were eager to visit. We had a group of about 15. Our mission was to see how the reserve had changed, to take an informal inventory of the plants that they had monitored, and brainstorm how we might begin to do citizen science again post-fire. Though we’d had rain at this point, the landscape didn’t look too different than it had in August. The green sprouts were taller. Ladybugs had taken up residence in the remains of a shrub.

But this time, I got to watch a bunch of people who had developed a very strong sense of place in this landscape see how the place had changed. I had adopted Stebbins as my own over the past couple of years, but I didn’t really visit all that often. Our volunteers were out there every month, or every couple of weeks. They had a routine. They observed their plants closely. They knew them well. I had been concerned that we’d need to use GPS data to find the plants that they’d monitored, but I needn’t have worried. I watched with amazement as the volunteers identified the location of nearly every plant–chatting amongst themselves, “No, that toyon was definitely by this rock here” or “This is where one of the monkeyflowers was, I’m sure of it.” In the end, we located all of the plants except a few monkeyflowers, which would have had the least protection of any of the plants during a fire. For the volunteers, they not only saw the broad landscape change, but they could pick out changes to individual plants.

My most recent visit was less than two weeks ago, a little more than 6 months post-fire. I tagged along on the class field trip for UC Davis’s fire ecology course. It was obvious from the moment we got there that there had been big changes: there was lots of green. The shrub skeletons remained, but grass and moss had filled in between them on many hillsides. California poppies colored some slopes yellow-green. We paused every hundred feet or so to get the name of another wildflower. I saw tiny, half-inch seedlings of the Ceanothus species that I am germinating (with fake fire!) in the lab. Not all was green–some areas are still pretty black and brown. But other places are brighter green than I’ve ever seen them. One hillside was covered in moss so colorful and soft that a student and I agreed that we should like to take a nap right there, on the new green carpet that had sprouted under the burned out chamise. It was so cool that I went home and googled “fire moss regeneration,” but I didn’t find much–just papers about fires in peat.

Over the course of three visits, I’ve built on my sense of place at Stebbins, watchning how it has grown and changed so far. I’ve seen changes to the landscape view–the macro scale–and to branches of individual trees–the micro scale. And I’ve watched other people build their sense of place, too.

I’ve been in several post-fire landscapes before–including several on a much larger, more newsworthy scale. I remember seeing the effects of the Yellowstone Fires in about 1998 with my family, ten years after those huge fires shaped national perceptions of wildfire on the landscape. More recently, I had the opportunity to explore high-severity areas of the Rim Fire in Yosemite. I learned a lot in those landscapes. But there is something truly special about watching a fire change a landscape that you know well, that you can visit by driving down the street for half an hour. That’s what a sense of place is all about.

One thought on “In the Black & Green at Stebbins Reserve”